Saturday evenings just got a bit more interesting for this couch potato! While channel surfing, I came across ‘Ray Stevens’ Nashville’ on RFD-TV. The hour-long show is a blend of Ray’s unique comedy, shared insider stories along with a hit song from  country music guest stars and a dance with an audience member during closing credits. 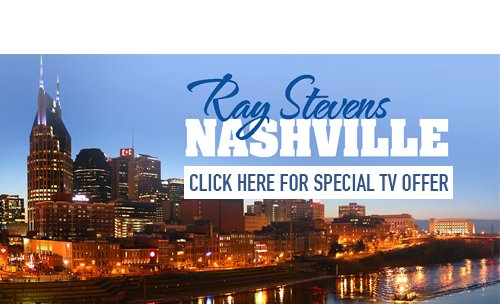 The episode I caught featured Larry Gatlin of the Gatlin Brothers. He and Ray joined voices on the hit song, ‘All the Gold’, and a story was shared about Larry’s first official evening in Nashville.

This show is entertaining on so many levels! I was raised on music that is now considered classic, including the many hits from the funny man., so to be able to watch his show every week and to laugh at his musical stories again is simply great. You never really outgrow getting the giggles from Ethel’s, Margaret’s and the Mississippi squirrel’s bad luck; there is just something classic about his songs.

To be able to hear the stories from other country stars is just as entertaining. I have watched two episodes to date, and each guest star had a story that involved Mel Tillis.

For those who wish they still had all of Ray’s cassette tapes, breathe easy! The show features commercials that advertise a huge collection of his comedy skits for sale on CD. A perfect Christmas gift!

RFD-TV has listed “Ray Stevens’ Nashvillle” as a year-long show, so there will be plenty of guest stars to watch each and every Saturday night!